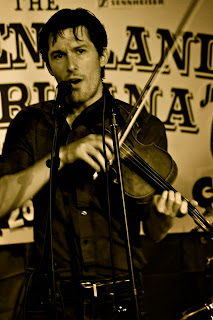 The Whiskey Boys have undergone a transformation over the past year, and it has really boded well for the group. Fleshing the outfit to include 5 total members (guitar, bass, fiddle, banjo, and mandolin), the sound is fuller, more powerful, and really grabs you by the head with two hands, pulls you in close and screams “LISTEN!” right in your face. Singer, fiddler, songwriter, and band leader David Delaney has truly found his voice in this new line up. His voice is more confident and robust and he has matured deeply as a songwriter and lyricist.

The arrangements on this record are very powerful and well thought out throughout the 10 tracks (11 if you count the bonus track). I really get hints of Punch Brothers here, and it’s not just the instrumentation. There is truly some inspired musicianship and song structuring going on with this new record. There is no “3 chord bluegrass progression number 1” here. Each part of every song is artfully crafted and orchestrated. Sure, the boys have that hint of bluegrass in the tunes and the instrument choices certainly reflect that, but this is something special and different about this music.

“Burn my Earth” is the first track and it kicks in…it kicks in hard…real hard. It just has a killer groove to the song. Delaney’s voice is on point here, the band all sings out during the chorus line, it has a great, great energy to it. The solo trade offs are incredible (especially that damn banjo, man!), the fiddle playing is prime, all the pieces really just fit and this tune sets the stage for the entire record to just be energized and hit you intensely.

What does every good record need? Why, an instrumental tune of course. “The Whiskey Stumble”, 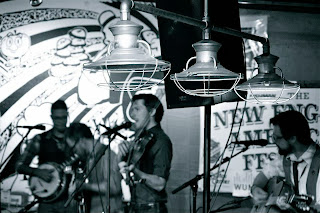 written by guitar player Michael Warren (from what I understand). Really encompasses that feeling. I honestly feel like I am stumbling my way around a saloon in a haze of that brown liquor. There is also a collective ensemble of bar room banter and clinking glasses in the background throughout the track. All of the boys are tight on their musical performances on the instrumental, the turn around, rise, and resolution of the song is great. And the ambiance that this track manages to attain is really quite excellent.

The title track “Time Machine” is where the Punch Brothers comparison comes in strong. The kick off is lead by a very jazzy influenced guitar. The word phrasing isn’t typical and predictable, it’s distinct and exciting. A really beautiful track that coaxes the listener along. The band firmly displays their remarkable musicianship without being pretentious. It is a really great track.

“2012” is an intensely instrospective and sincere track. Delaney really airs out the laundry here and shares a lot of the past year for better or worse. I think this song really is the basis for my feeling of his maturing as a songwriter. I am thrilled to see that his writing has gotten so deep and personal. As fun as previous released tracks like “Washington is Coming” are to listen to, I don’t get that deep seeded emotion and personal sharing level from them. I think being able to share something personal in a song is the most intimate way you can share something with folks and I applaud Delaney for this track.

Each member adds their own special touch to this group. Mark Whitaker’s banjo playing is nothing short of pure brilliance, Delaney’s roll as band leader is evident and he really pushes the band along (plus he is a killer fiddle player). Guitarist Michael Warren’s jazz background fits tightly in with the band as well, tasteful, but at times (where needed) he really can let loose and let that rootsy feel shine through. Rhythm is held down tightly and the foundation of these songs, ala bassist Jon Polit and the chop of the mandolin courtesy of Jeff Butcher (though some really tasty mando licks are also prevalent by Butcher throughout the work). 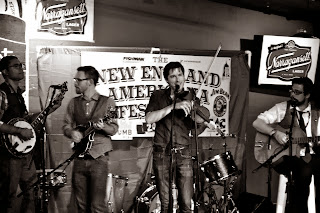 This is just the beginning for The Whiskey Boys as they currently stand. I can say that I am sincerely excited for where the guys are going next. This is truly a great and exciting project for these fellas.
Be sure to check them out at their CD release show later on in October 19th at the Lizard Lounge. (Details below) and online at http://www.whiskeyboys.com/

Posted by Red Line Roots Music Blog at 8:11 AM