For a first listen to Allysen Callery's new record I picked a song at random...ok, maybe it wasn't totally random, I kind of just looked at the songs and said "hey, that title stands out to me right away" and it also happens to be the first song on the record. But still, somewhat random...anyway, my first listen for the tune "In Your Hollow" from Callery's new record Mumblin' Sue. 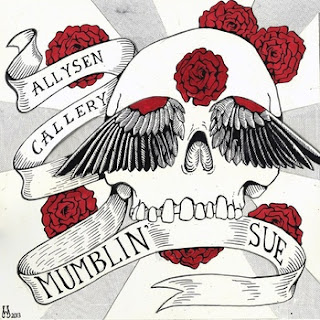 The tune starts off right away with Allysen's classic fingerpicking. This girl is a monster when it comes to fingerstyle guitar. She is just fantastic, taking a widely used playing style and really developing it into her own, very noticeable and very unique sound. Allysen Callery's voice is very distinct, almost from a different time and place. The writing also matches the mood of this track, its very pensive, slightly sorrowful, and a little, tiny bit gloomy. But it really conveys that feeling in such a successful way that it doesn't matter I am feeling a bit saddened, it just matters that Callery's writing is making me feel something.


the echo of your absence
haunts the air I breathe

The tune is a bit haunting, winding along a gravely road on a gray day out in some countryside. Pretty, but really at the same time, quite melancholy. I "feel" this song. In it's very short two minutes and twenty-six seconds I am completely transformed into another mindset. A bit sleepy, a bit transcendent, but undeniably a very moving and effective song. The record is fairly understated (at least in instrumentation) but honest, seemingly simple arrangements made from what I imagine were initially complicated and well thought out palettes.

Be sure to head on over to Allysen Callery's bandcamp to pick this new record up (released in June).

http://allysencallery.bandcamp.com/album/mumblin-sue
Posted by Red Line Roots Music Blog at 11:45 AM